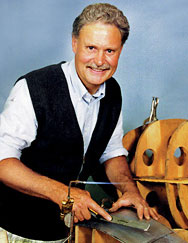 I have learned much in my years at Ananda, but never enough. And I am still learning about the little topic of metals; how great is God in comparison, and the vastness of Him to know, by ourselves. Each one of us should strive to know Him, or Her, or that infinite impersonal Energy. The paths to God are many. Amen, Shanti, Shalom.

I first met Swami Kriyananda in 1976, on the anniversary of Master’s (Yogananda’s) Mahasamadhi, and then took Kriya initiation from Swamiji in 1977. I had been attending many churches on my own since the age of 12, but Master through Ananda gave me the spiritual experience I was really seeking.

I had been working as a professional auto restorer in Reno, Nevada for over seven years when I made the decision to move near Swami Kriyananda. In 1979 I purchased land next door to the first Ananda Community where I raised a family and started my own metalworking company TM Technologies (www.tinmantech.com). I was also asked to lead the Ananda Healing Prayer Ministry, which I did until I transferred it in 1989 to Mary Kretzmann, who has done a great and selfless service with it ever since.

By 1985 I had been cleaning, annealing and repairing bangles for several years when I made pilgrimage to the Holy Land and Italy with an Ananda group and Swamiji. It was a deep spiritual experience for me. That same year Swamiji gave me the formula and responsibility for making the 3-Metal Astrological Bangles.

Swamiji made me an Ananda minister in 1987. At Swamiji’s invitation I moved to Gurgaon, India for over a year in 2007 and was part of his Solar energy company there. I feel that Swamiji is my oldest and dearest friend, and Master through him.

Since Swamiji’s passing in 2013, I have continued this service to Guru, and living at Ananda Village, California.